Networking Choices: It’s Not You, It’s Me 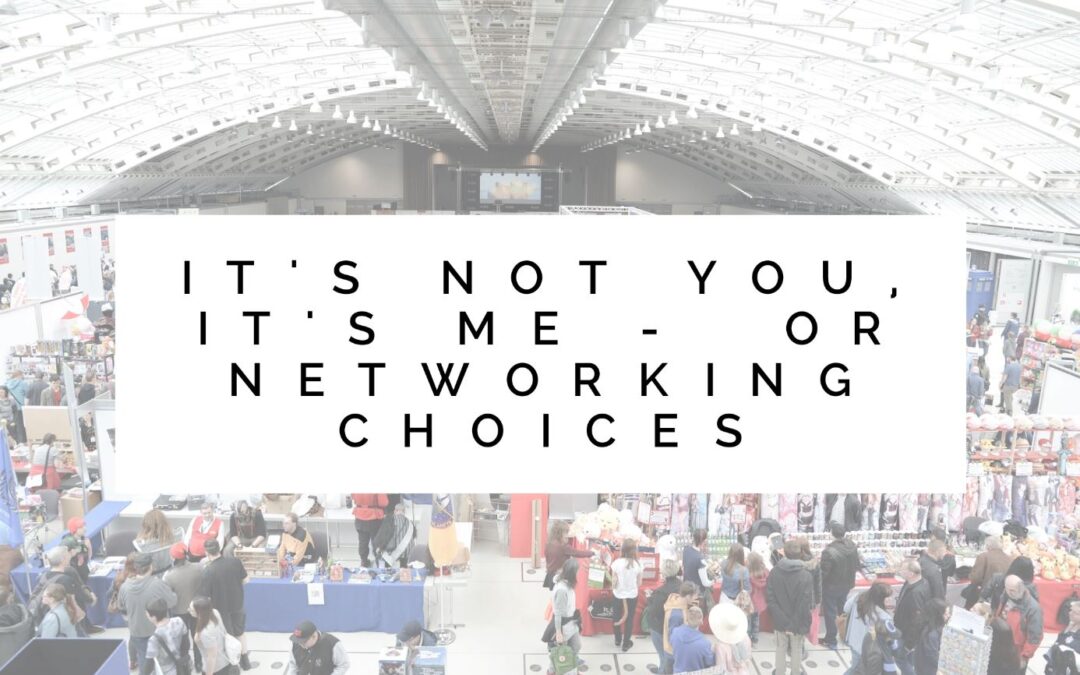 Why’s it not working?

Do you find that you just can’t work out what works and what doesn’t in networking?
Is there too much out there and nothing specific to your needs and your industry?

There are many different formats of networking which all have their place in helping businesses grow in all industries.
Early morning networking, lunchtime networking, structured networking, informal networking, the “in-between” that is a bit of both, or that’s not quite sure what it is, membership-based networking, “just rock up” networking, online communities etc.

Networking overload! What do I do?

There is a lot out there and you may be getting a tad overwhelmed.
While you may need to kiss a few frogs to find your “tribe” or what works for you, try not to spread yourself too thin in the long run. It is my belief that for most businesses there is no one format that will be your fit. So, find two or three that you enjoy and attend regularly.

I’d also encourage the new networker, or even the seasoned networker who’s still not sure what works, to have a bit of introspection.

People often consider the format of networking, who’s there, what businesses, the group leader or the venue to judge (or worse, pre-judge) whether something will work for them and their business. Will they meet the contacts they need? Will they get the business they’re looking for?

But what are you putting into your networking and what are you bringing to the table? We’ll talk about that in more detail in another article.

This judgement tends to happen when people only know to look at the first party level of networking. But what do I mean by that?

What type of business can I expect from networking?

• First party business: this is with the people in the room. When you get to know a fellow networker, you like them, and you need their services.
• Third party business: this happens when someone knows, likes and trusts you enough to refer you to their network.
• Strategic Alliances: your businesses have synergy and you can join forces to offer something valuable to your clients, be it a workshop or passing work between you.

This is all bottom line tangible stuff – but the less tangible benefits must be considered too, such as support, training and connection with like-minded individuals, does the group provide that?

Why is this relevant to this blog??

Well, firstly, it’s educational, I wish I’d realised this when I ventured out into the world of business networking! It’s not all sell, sell, sell, far from it! You can read this blog to hear a bit more about that.
But also, because when people evaluate a networking group, they are usually not looking beyond the first type of business.

So, take a leap, try something new, even if you think your customers aren’t necessarily in the room.
You’ll probably meet some pretty awesome people, have a great lunch/coffee/vino/breakfast (not in that order) and leave inspired!

If you’re lucky, you’ll have picked up a few great connections or even some new business.

And if you’re REALLY lucky, you may just have found your networking “home” and realise the value of returning to continue building those relationships.

So, go on, take the leap and spread your wings.