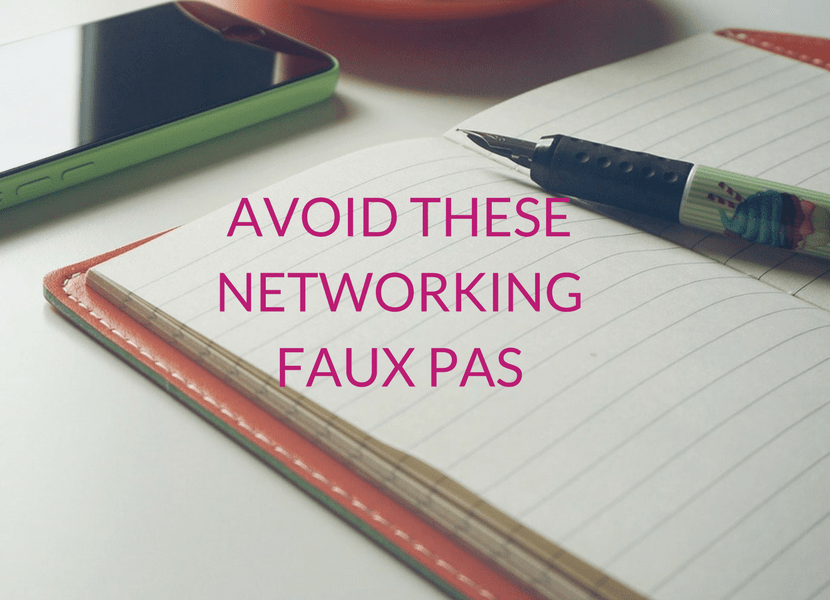 How To Avoid The Following Networking Faux Pas

Networking, it can be a bit like marmite for some individuals, you either love it or you hate it.

Done in the right manner networking can be a powerful tool in your business plan.  Although some folk do give networking a bad name, you’ll know who they are, the ones who shove a business card in your face without asking permission midway through a conversation you’re having.  Then, as a follow up they email relentlessly trying to sell their product or service.

Not everyone begins as a natural networker and it can take time to adjust, or an experience that will define your networking mindset.

‘, he highlights that particular moment in his early career when he was responsible for marketing at Deloitte and was experiencing resistance amongst his staff, so he reached out to an executive coach for guidance.

“What do I need to do to become a great leader?” asked Ferrazzi, “nothing” replied his coach Nancy Badore, and had him take a look around his office at the pictures of himself, and with celebrities and noted that not one of them were with his team or anything to indicate his team’s accomplishments, so she asked him “do you understand that it’s your team’s accomplishments, and what they do because of you, not for you, that will generate your mark as a leader?” This question floored him.

Nancy had shared with him that leadership was not about being one up on your team and expecting them to do the work for you, it works best when they worked together and he came to realise “that I worked for them as much as they worked for me!”

Following this encounter Keith Ferrazzi wanted to look back at a life and a career of reaching out to others, creating a web of friendships to fall back on and not the ashes of bad encounters.

In ‘Never Eat Alone’ he shares 6 of his rules to network successfully;

When you connect with someone, make it personal, share how you can help them, take the time to get to know them properly by scheduling 1-1’s with meaningful dialogue.

2. Don’t rely on the currency of gossip.

Using gossip as a currency for connecting may seem like an easy conversation starter but it won’t do you good in the long run. “Eventually the information well will run dry as more and more people realize you’re not to be trusted.” writes Ferrazzi

How do you want to be remembered?

3. Don’t come to the party empty-handed.

Being part of a network and maintaining those relationships is about giving as much as it is receiving. Offer value without the expectation of it in return and watch your network grow.

4. Don’t treat those under you poorly.

“In business, the food chain is transient. You must treat people with respect up and down the ladder” Ferrazzi said, you never know when your paths maybe aligned again in the future

No hidden agendas, show up as your authentic self.  Ferrazzi explains that when he meets someone at a conference who he’s been dying to meet, he won’t hide his enthusiasm “It’s a pleasure to finally meet you. I’ve admired your work from afar for quite some time and been thinking how beneficial it might be if we could meet one another.”

“Reaching out to others is not a numbers game. Your goal is to make genuine connections with people you can count on.” remarks Ferrazzi

Connect with people on a personal level and not just part of a generic mass email sent weekly. Ferrazzi shares a story where once he had graduated from Yale, he heard that sending personal cards was a good idea and vowed to send his contacts a holiday/new year’s card every year.

By the time he had got to Deloitte he had a database of 1000’s and enlisted the help of others to sign his cards for him, Ferrazzi says “The intention was good enough until a college roommate noted (actually gibed) how appreciative he was to get not one but actually three cards one year .. . all with different signatures”

Ferrazzi concludes “If you’re not making friends while connecting, best to resign yourself to dealing with people who don’t care much about what happens to you. Being disliked will kill your connecting efforts before they begin. Alternatively, being liked can be the most potent, constructive force for getting business done.”